Being in Andalusia it’s hard to let go visiting Gibraltar. I think everyone associates this place with geography lessons. It is here that the famous Gibraltar Strait is located, which separates Europe from Africa and connects the Mediterranean Sea with the Atlantic Ocean. In today’s episode, the fourth day of our trip around Spain, I will show you what this place looks like.

We leave the apartment in Ronda today and we take the A-397 road towards San Pedro Alcántara. The route is quite high in the mountains, the temperature indicator in the car only indicates 3 degrees at some point. The route is famous for motorcyclists. You probably expect that we pass maybe about 20. Wrong. We pass about 200. I have no idea why they chose such weather for rides, but apparently there are always so many of them here. 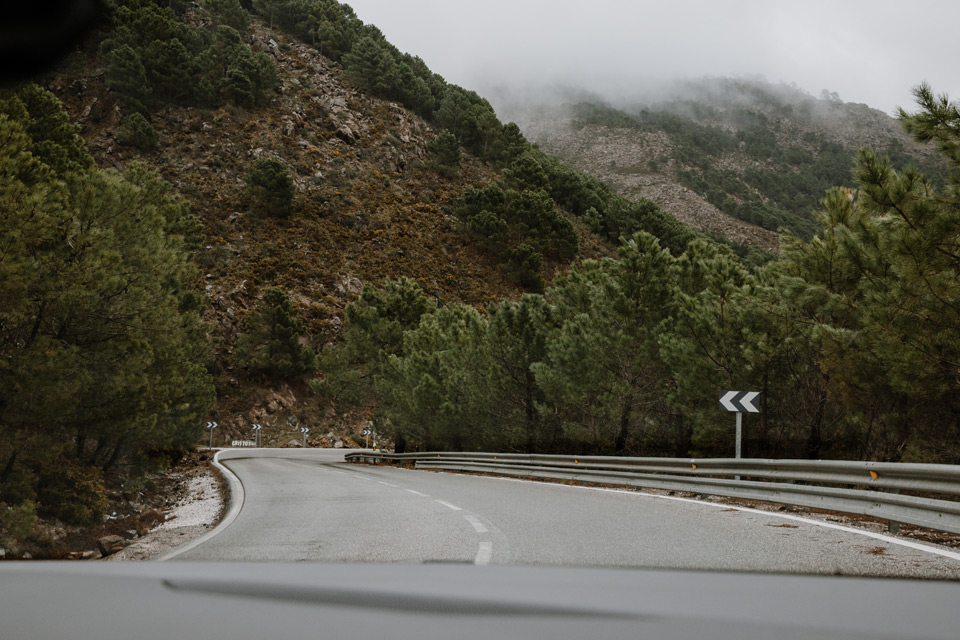 We pass through the tiny, colorful town of La Heredia located at the foot of the Sierra Blanca mountains.

A bit further we enter San Pedro Alcántara. Since then, we take the free A-7 motorway along the ocean directly towards Gibraltar. We pass many many exclusive hotels and holiday resorts, where we pass a roundabout every minute. The climate here is completely different than in other places of Andalusia. 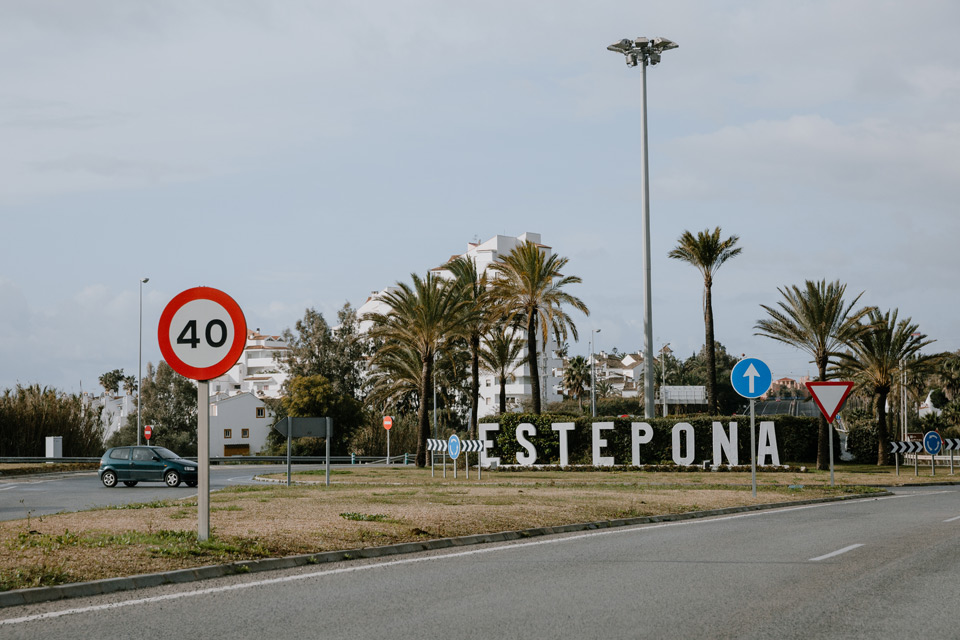 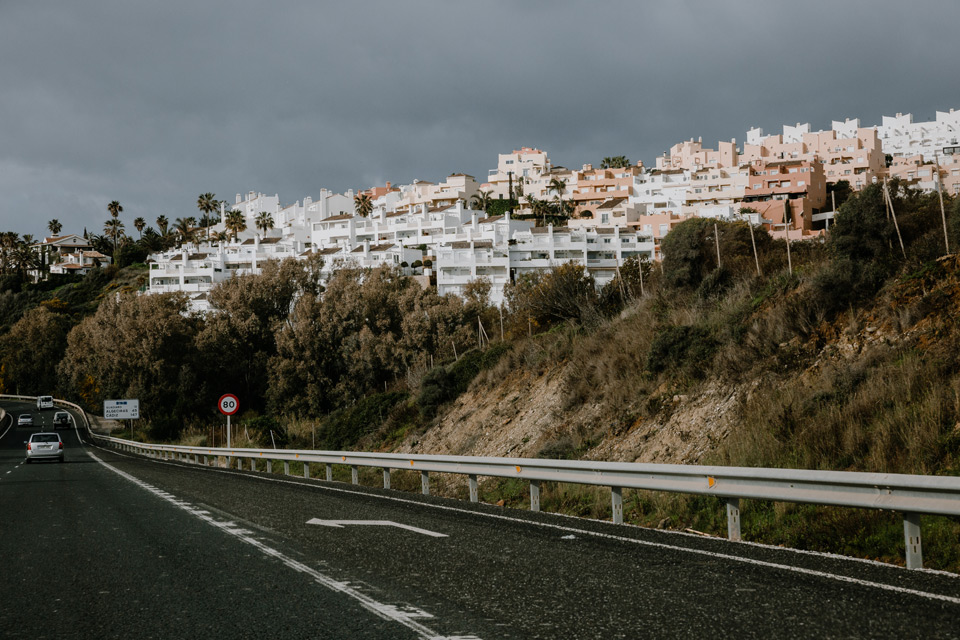 About 15 kilometers before Gibraltar we can already see the famous rock. 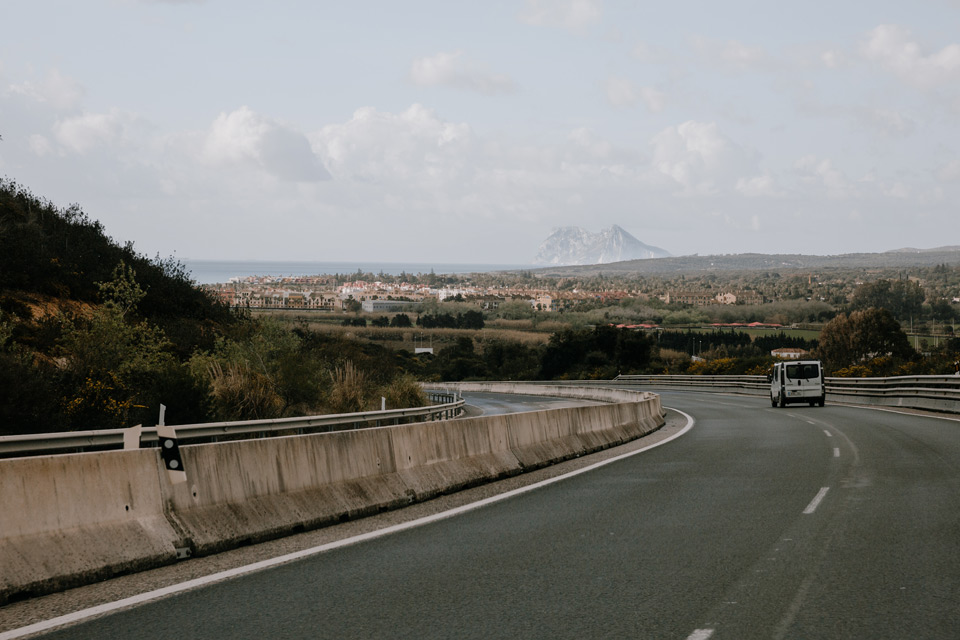 Gibraltar – where to park the car

We are already close to the border with Gibraltar. We drive down Av. Príncipe de Asturias from the west. We planned to reach the eastern part of it and park it at free parking spaces next to the ocean. The road was blocked by posts and the only option to continue driving was to enter the parking lot. Our plans were different, but parking prices are fortunately not high. We save time, we would waste for a walk.

If you go to Gibraltar, it’s better to park on the Spanish side and cross the border on foot. Gibraltar belongs to England, there is a normal border crossing at which ID cards are checked. The inhabitants of Gibraltar normally speak English.

Gibraltar is a mixture of 3 places: Spain, England and Africa. Spain, because the buildings are mainly in the Spanish style, England, because we can find red telephone boxes, English trash cans and signposts, Africa, because monkeys live here.

What to see in Gibraltar?

In Gibraltar it’s worth going down Main Street and entering the Rock of Gibraltar. We plan to get upstairs using the cable car. Our plans were a bit busted by the weather, but more on that in a moment. We go through the airport apron, which is located just behind the border crossing and we go towards the center. Thanks to this we get to Main Street. 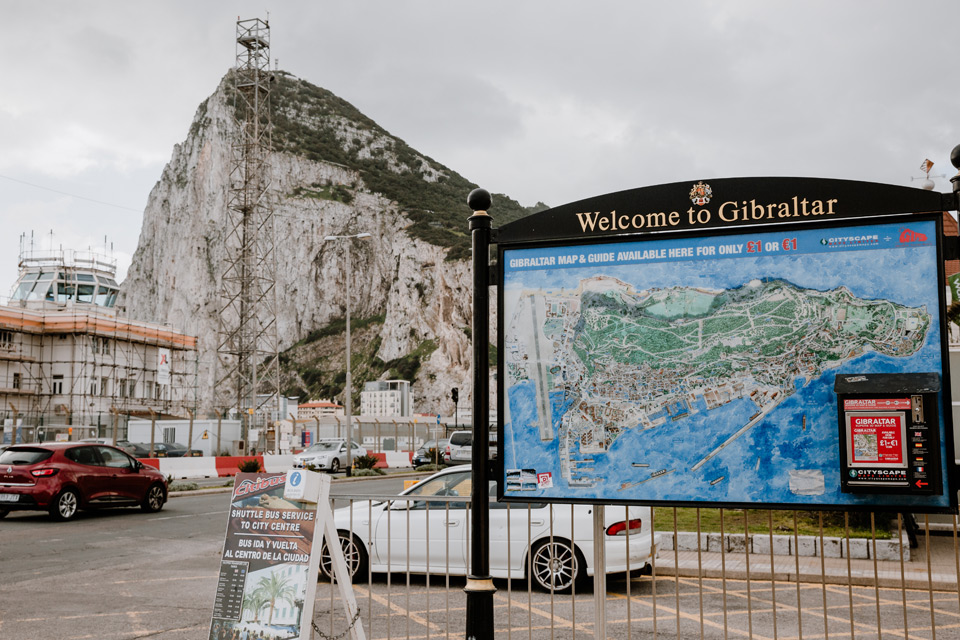 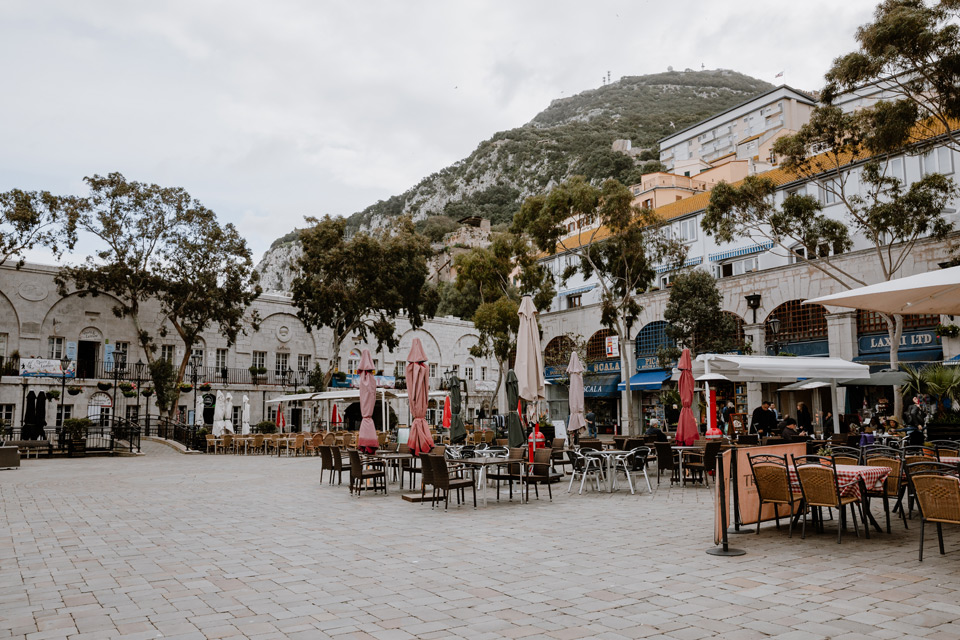 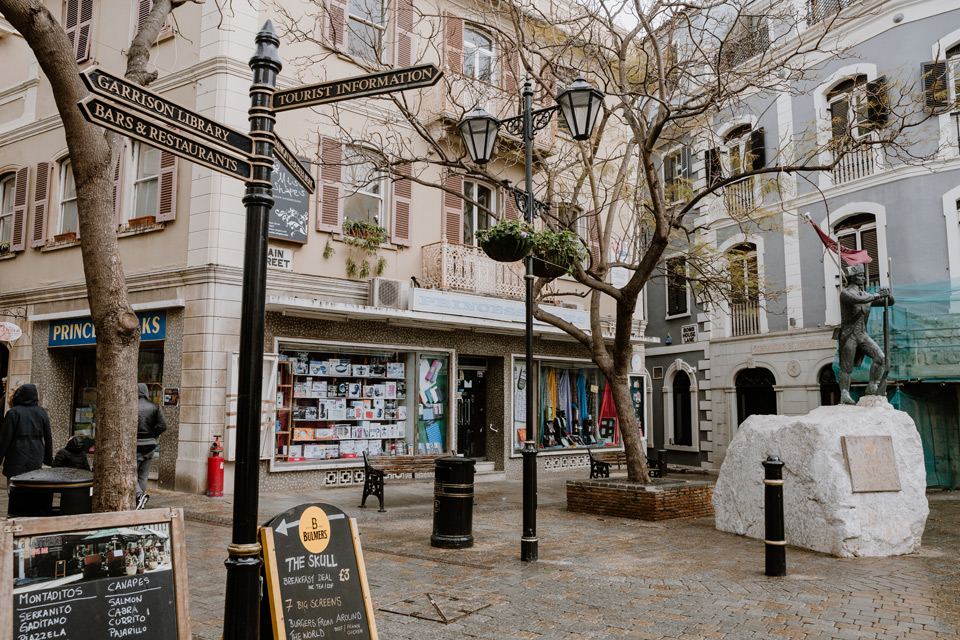 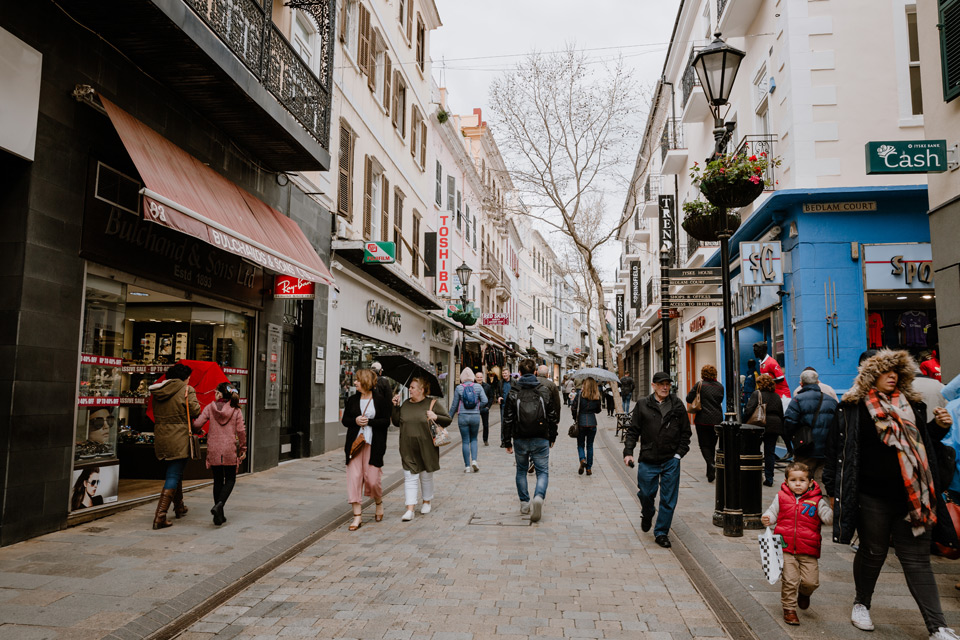 There is kinda long way to the cable car. Unfortunately, we must stop for a moment, because it starts to rain. We are angry because we expected to take a break from Polish frosts. 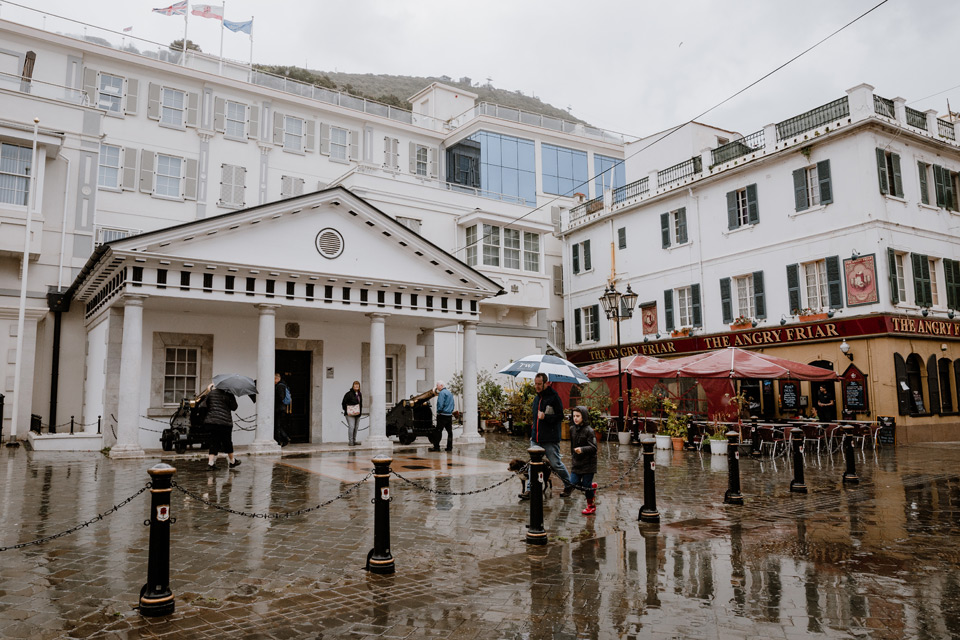 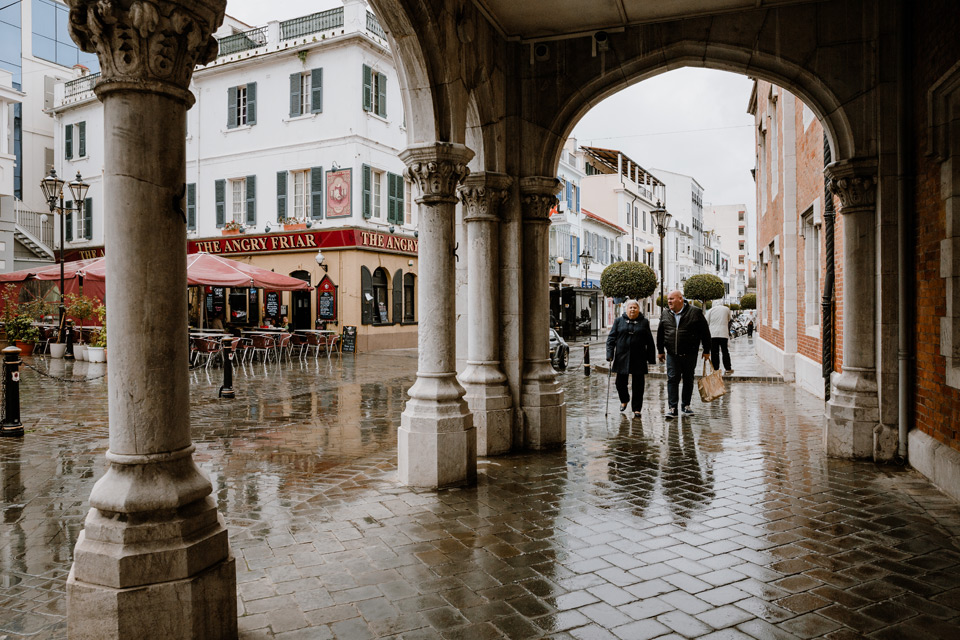 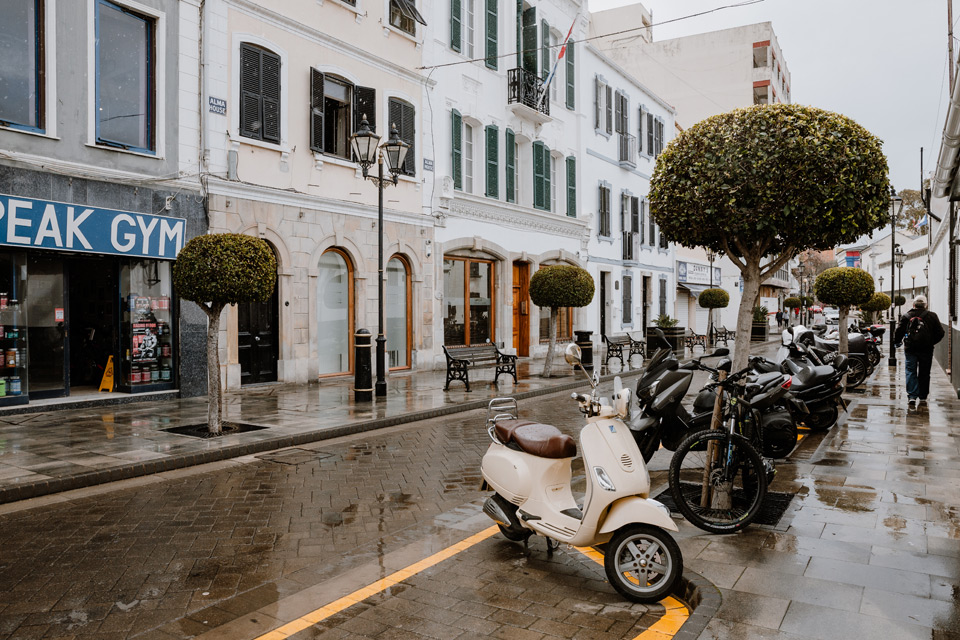 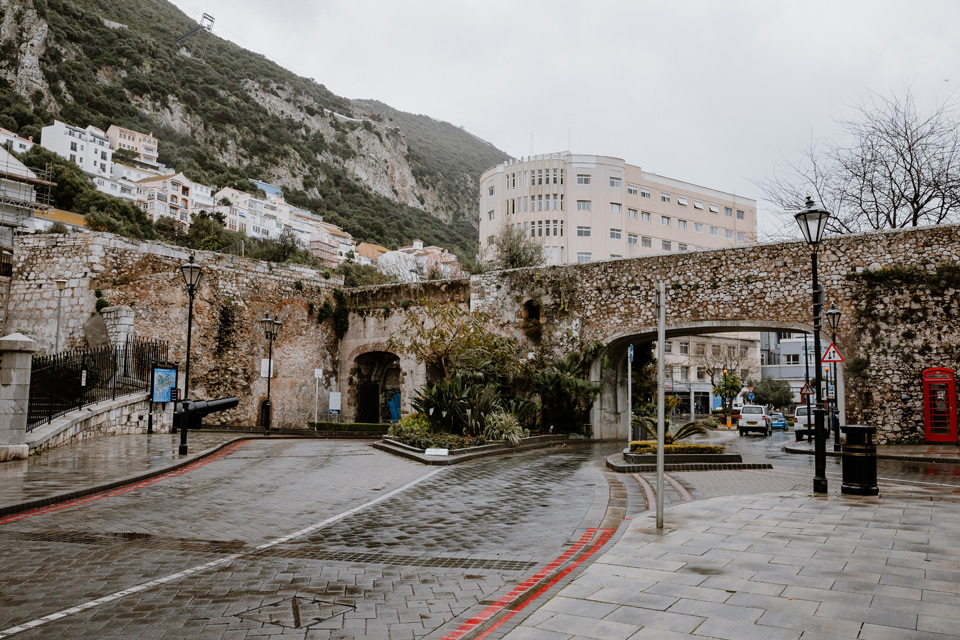 In the end we manage to reach the cable car, and on the spot it turns out to be closed due to high winds. At first I’m broken. I know that it’s possible to go up by bus, but I read reviews on blogs that drivers pull tourists and in reality they pay 2 times more than for the cable car. However, we have no choice but to talk to the owner of one of the buses. He offers us a price of 30 euros. It is 10 euros more than per cable car, but we use this offer. We don’t have time to climb the rock on foot. 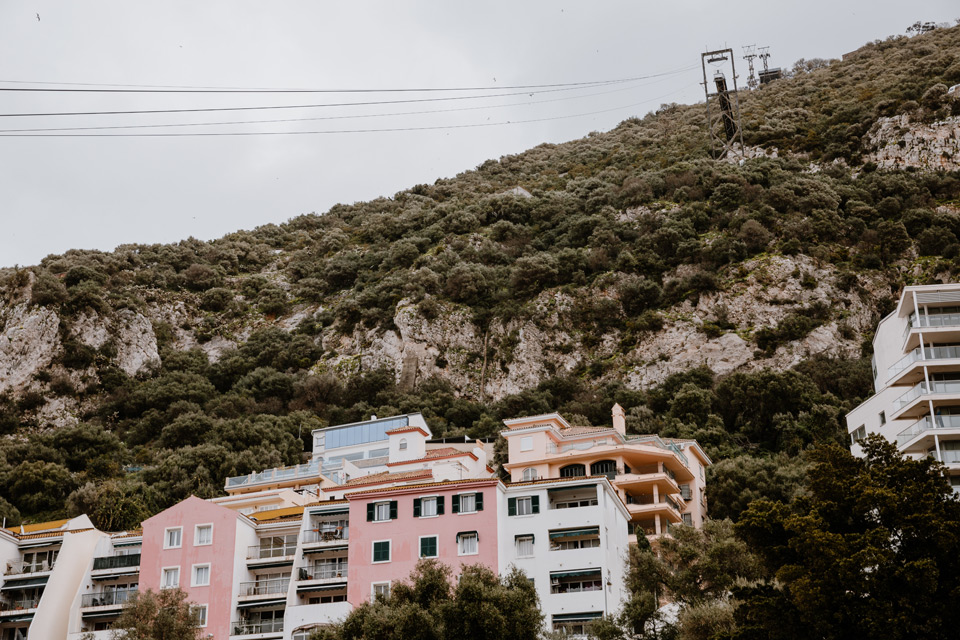 Interesting places on the way to the Rock of Gibraltar

We go to the first stop, because it turns out that the price does not only include the ride itself, but also we will stop in several places. We see a monument called Pillars of Hercules. So far, the views don’t impress us. 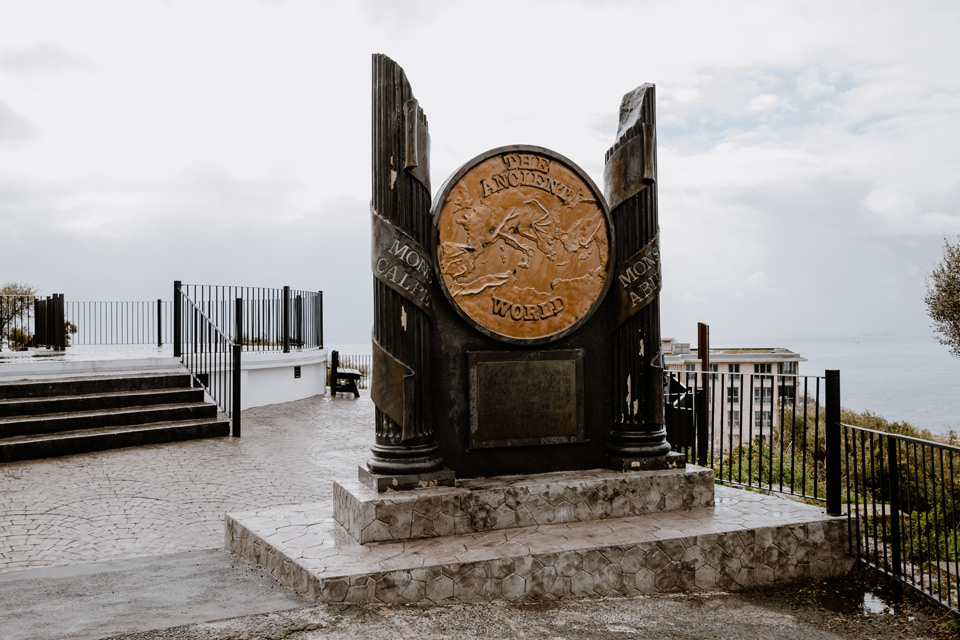 The second stop is the St. Michael’s Cave. Pretty small but interesting, reminiscent of a dragon cave in Mallorca. Entrance to the cave costs 10 euros. You get a ticket that also authorizes you to enter other attractions in Gibraltar. We don’t pay for it, because it’s handled by a bus carrier. From here it is already known why we pay 10 euros more than per cable car- bus drivers don’t incur additional costs. The price difference is the price of additional attractions that we would not discover using the cable car. 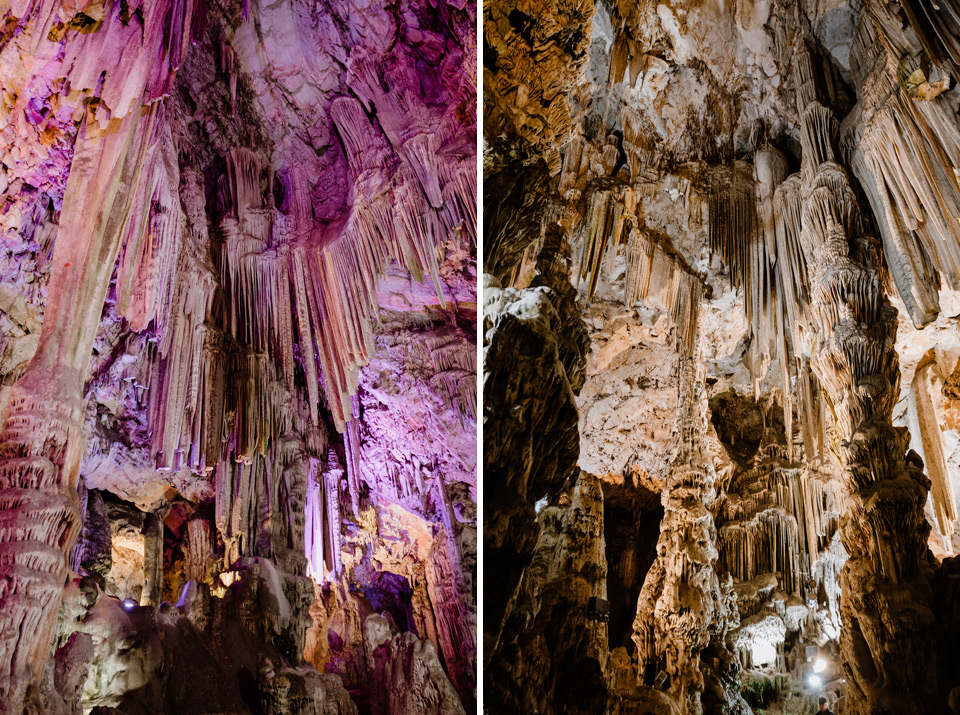 Here we see the first monkeys. People run after them with their phones and take pictures. And monkeys don’t pay attention at all, they take care of themselves. Only the larger ones sometimes closely observe people, but I don’t feel that they are aggressive. 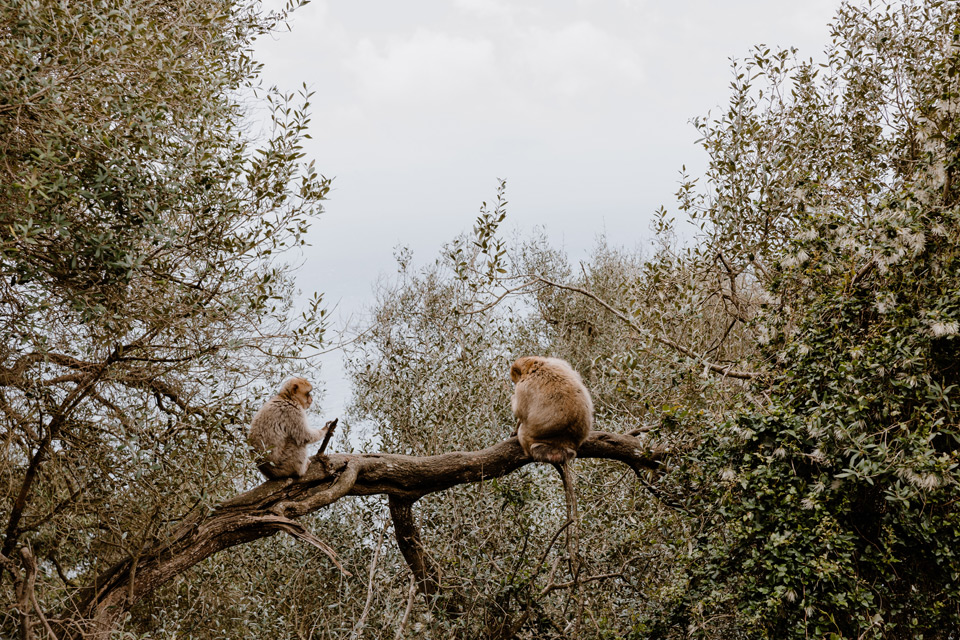 We get on the bus. The driver tells in English interesting facts about Gibraltar, Wojtek translates his words into Polish for our three. He says we will be able to take a picture with the monkeys. The driver knows them and knows how to handle them and which are harmless. He warns that monkeys may smell a little. Me, Wojtek and Beata take this opportunity. The monkeys pose very nicely for photos. We don’t feel them stinking, but you have to be careful, because one monkey didn’t like one lady and pissed on her. We are glad that we went by bus. Entering the cable car would not grant us such souvenirs in the form of photos with African colleagues. 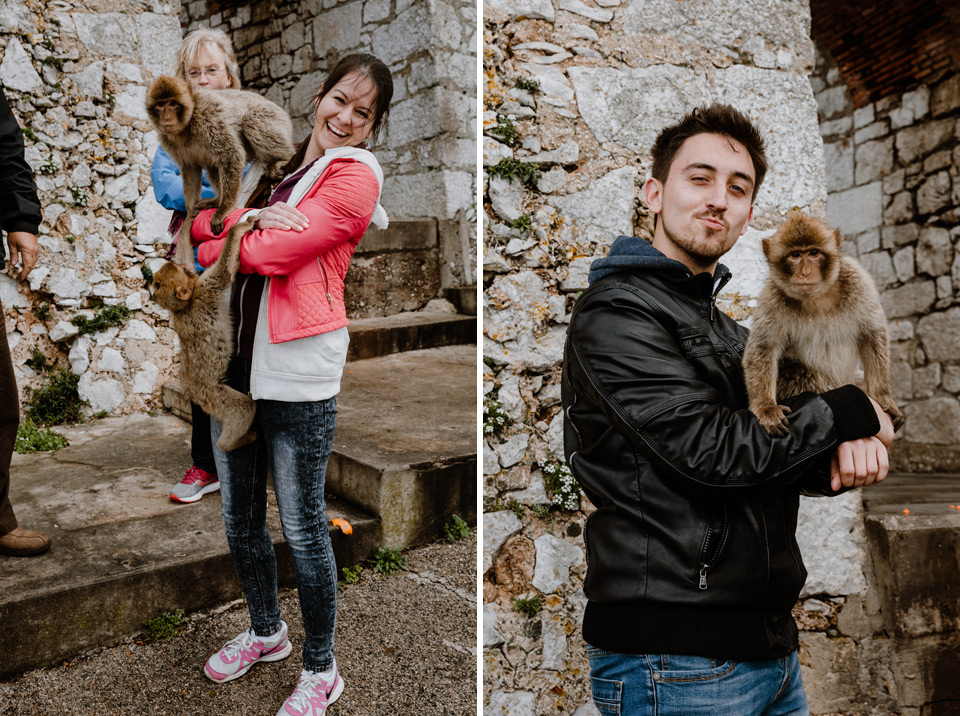 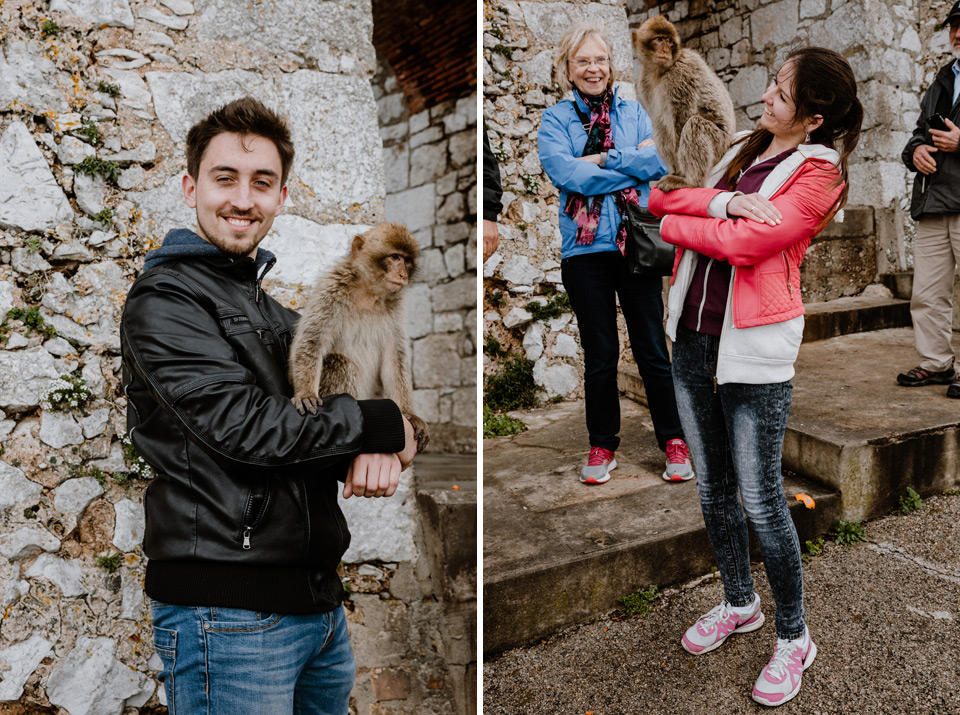 We have already reached the top, we are right next to the cable car station. Unfortunately, we don’t see Africa because of the cloudy sky and the low transparency of the air. 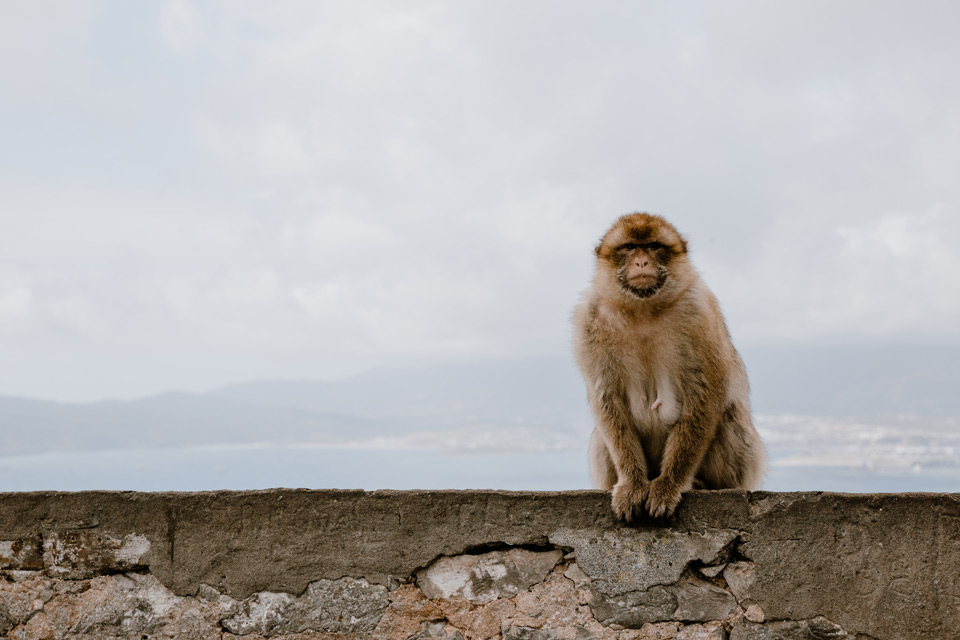 The next stop is the Military Heritage Center. Here we have two options: either get off or go to visit the Great Siege Tunnels and go down on foot (about 10 minutes to the center) or ride down with the bus. We choose the first option, pay and say goodbye. So we gonna stay here a moment, photograph the cannon and views of Gibraltar. 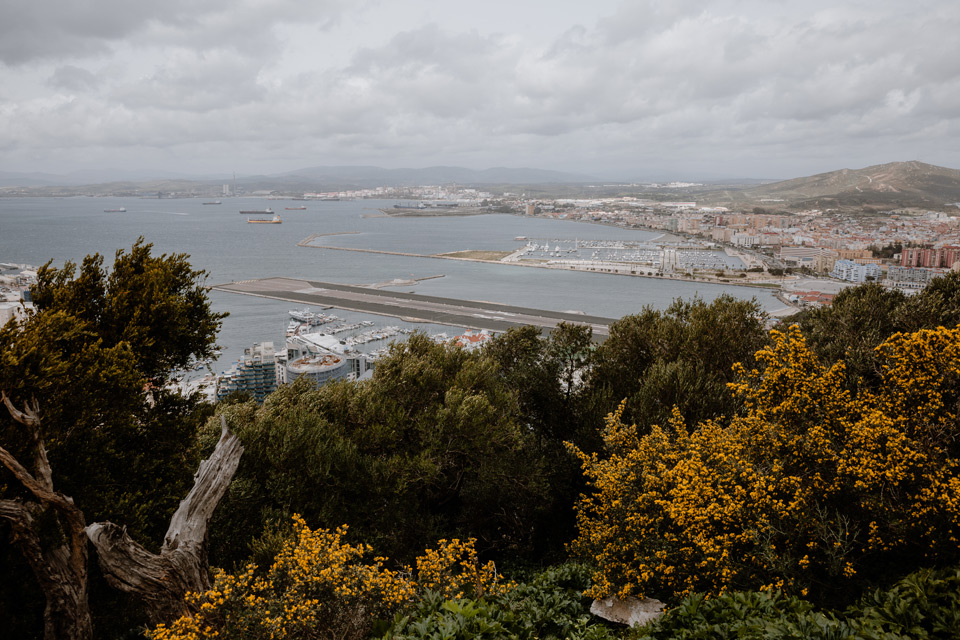 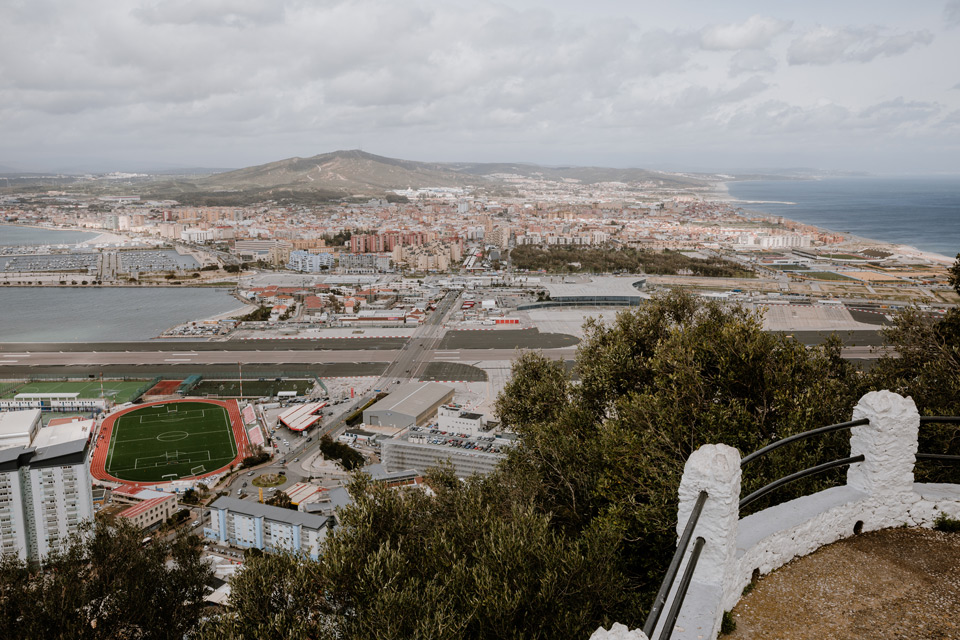 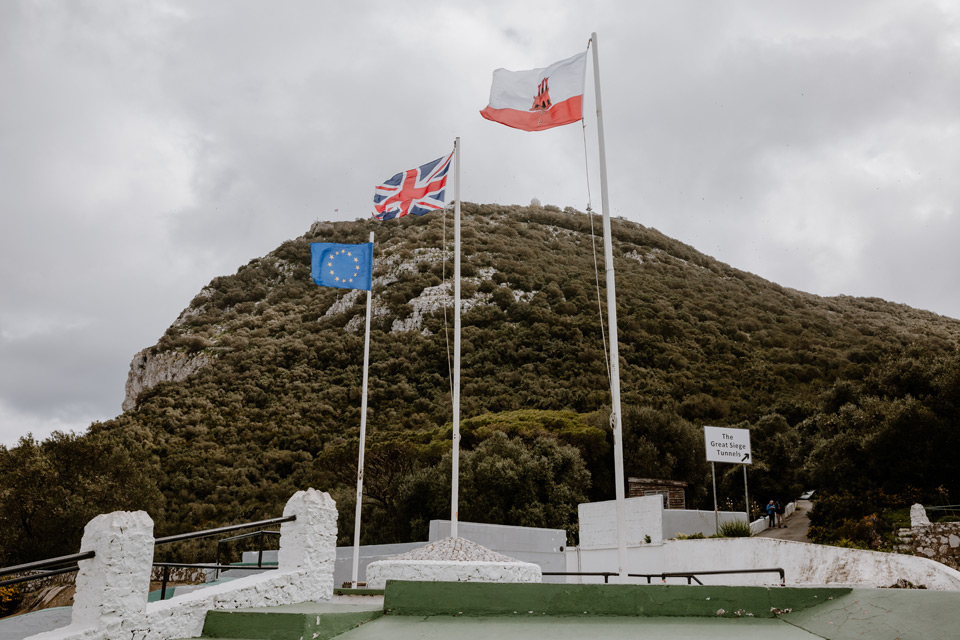 We go towards the tunnel. It seems to me that the Military Heritage Center could also be accessed using our tickets, but Wojtek didn’t understand the driver. When it comes to impressions from the Great Siege Tunnels, I recommend them only to people interested in history. For me it was long and boring. When we reach its end, we have to come back the same way. 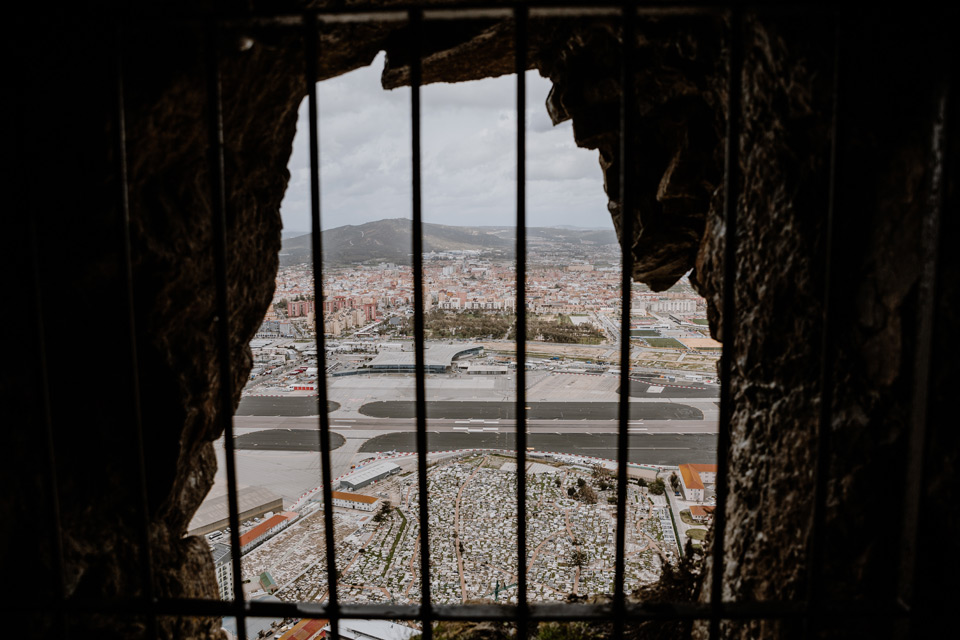 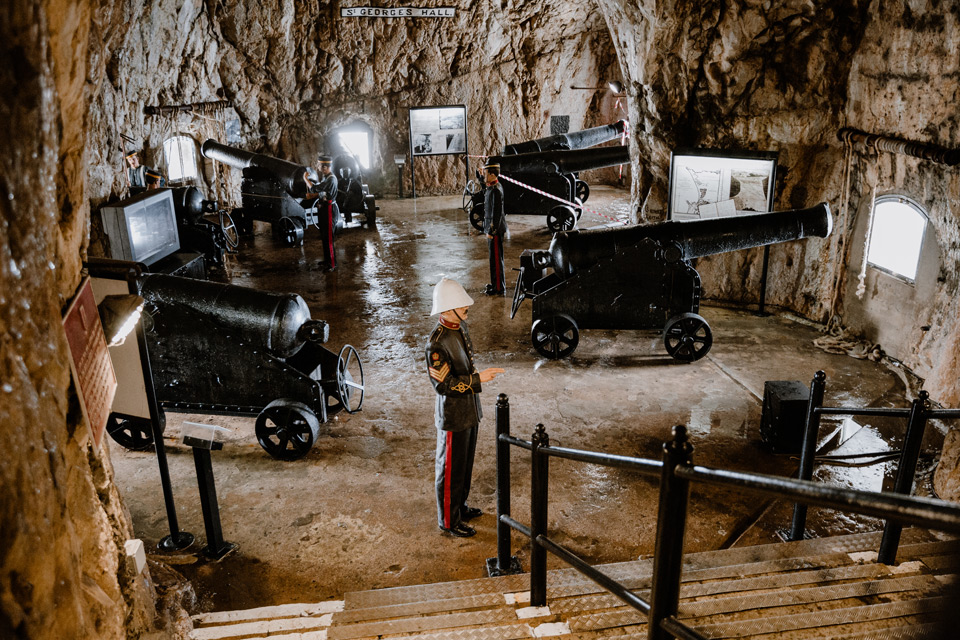 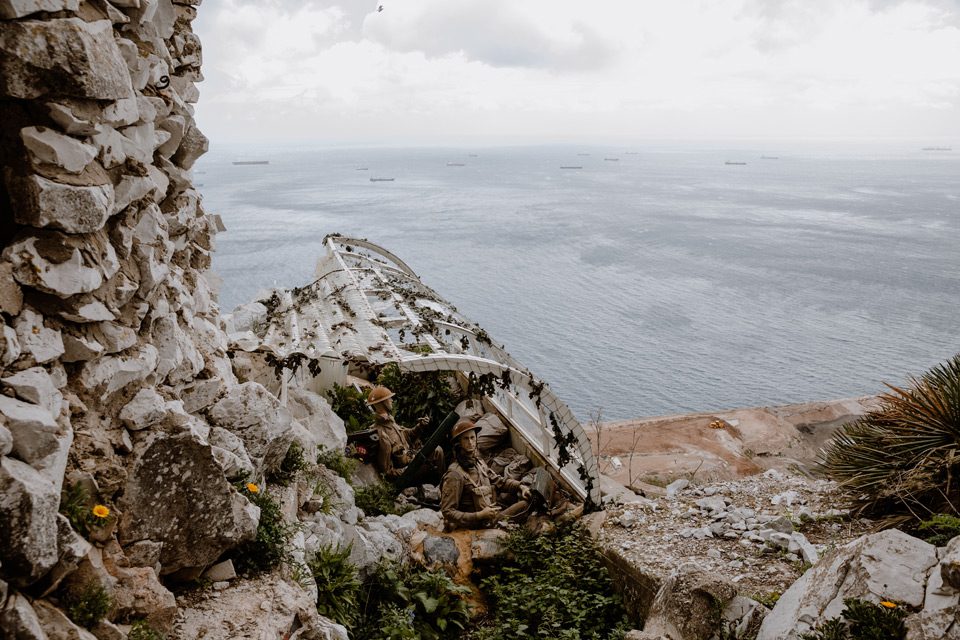 After leaving the tunnel we go down the road. Along the way we pass signs saying that we should watch out for grasshoppers and butterflies. A moment later we reach Moorish Castle. We show you our tickets, but really the entrance is guarded by someone else – a monkey. 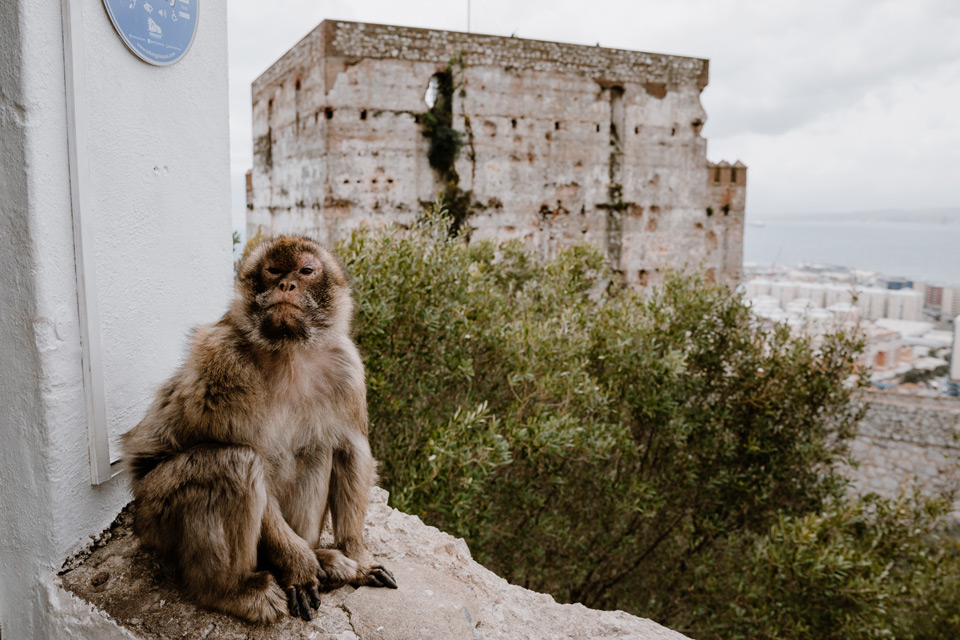 Wojtek, Beata and dad enter the castle. I, due to terrible back pain, decide to rest at the bottom for a moment. My legs never hurt for the whole trip, but my back really did. 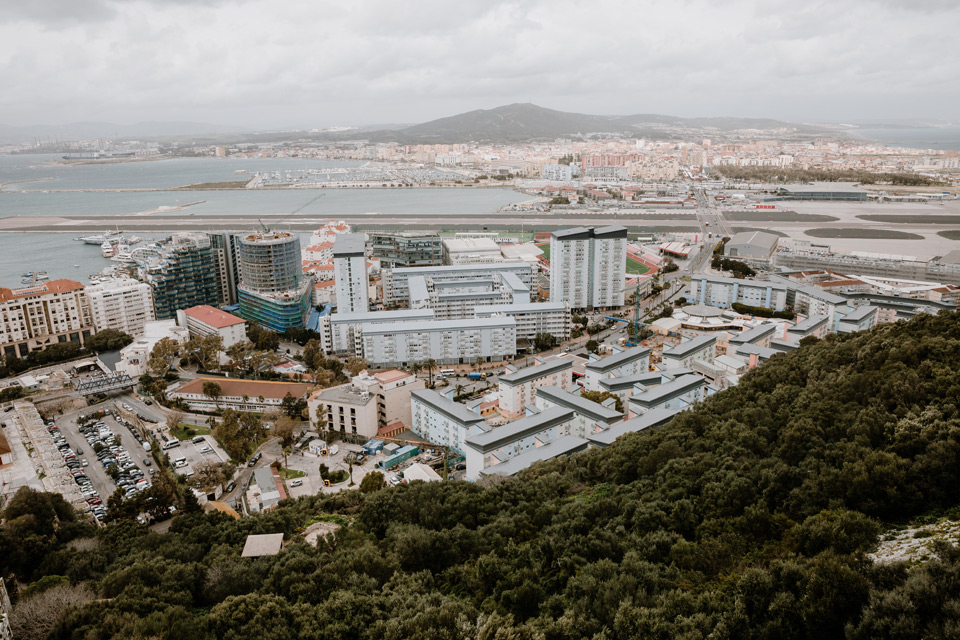 Behind the castle we pass another museum. We don’t enter it because we don’t wanna waste our time. None of us are history fans, and we’re tired.
The road to the center isn’t as obvious as it seems and we have to use google maps. 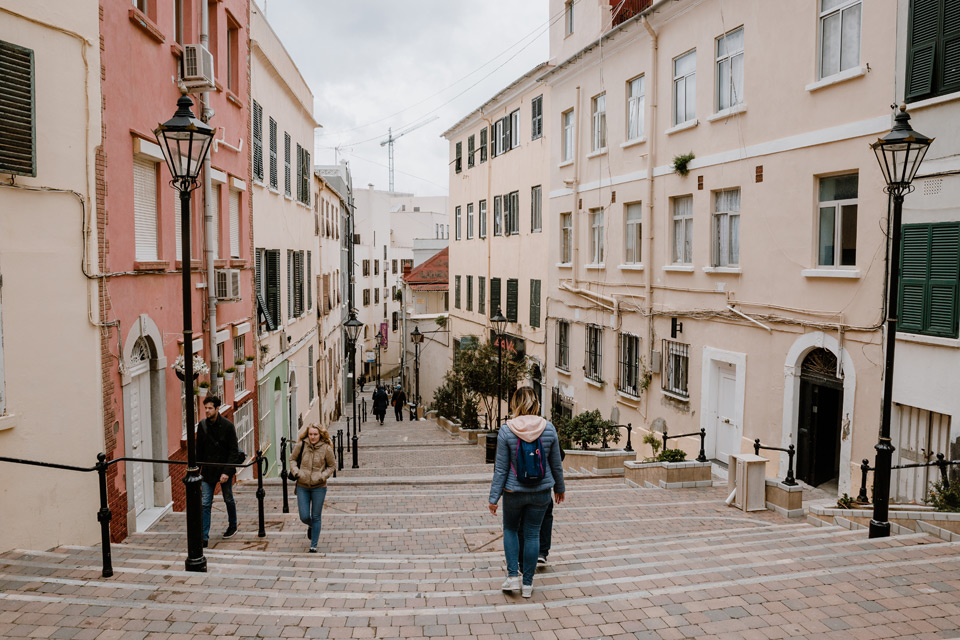 We cross Main Street again and follow the same road towards the car. Then we look towards the Rock of Gibraltar, we see the castle just visited. We wouldn’t be there if we rode upstairs by cable car. It also applies to many other things. Therefore, for people who have more time, we recommend a bus trip or entry on foot. Alternatively, you can take the cable car up the mountain and go down on foot … only then would you pass Pillars of Hercules and the cave of St. Michael’s Cave, because they are from a different side than other attractions.

The best for me is the option of entering the bus, but it’s worth catching it right after the border crossing – the price is the same (30 euros), and we save a long way to the cable car, from where we were entering. You will cross Main Street on the way back and all the points will be hooked. Ask, however, what exactly they offer in the trip, because the bad opinion about bus drivers on blogs didn’t come from nowhere.

Being in Gibraltar we skipped Europa Point – the southernmost place of Gibraltar. There is a Sikorski Memorial. I write about it, because maybe someone will be interested in going there.

Gibraltar – GOING BACK TO THE CAR PARK

A huge downpour begins before the border crossing. Fortunately, now, and not when we were on a rock. In addition, they close the entrance to the airport, we suspect that the plane will land. We wait under the roof of a nearby gas station for the possibility of continuing. I thought that before that we would wait for 10 minutes, but after 3 minutes we could go on. However, probably no aircraft took off or landed… We pass the airport apron with light stress and look left and right, if nothing lands on our heads. We return to the car and leave Gibraltar.

Tarifa – outline of the African coast

Gibraltar is very close to Africa, but the closest is Tarifa – a town located 40 km from Gibraltar. It’s on the way to our today’s accommodation in Cadiz, so despite the bad weather we decide to come here. We have been warned that there are very strong winds here (even in summer), but we didn’t expect such ones. When the car door was opened, sand was already inside. We put on sunglasses so that nothing gets in the eyes and we walked a bit to the beach, but we returned quickly. I took the following pictures from the car, I don’t recommend taking the cameras out. Despite the poor weather, the gray outline of the African coast can be seen. 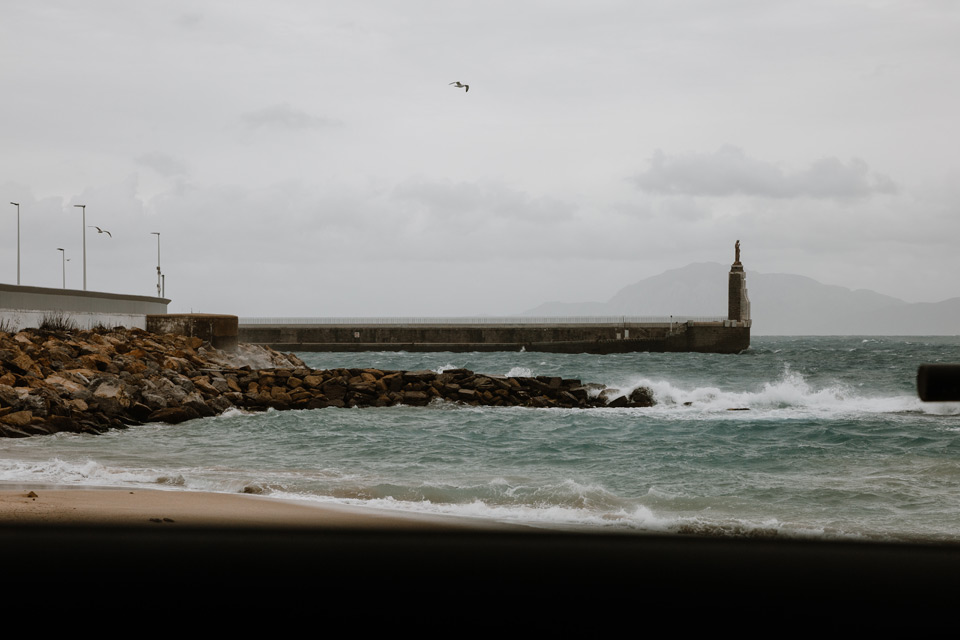 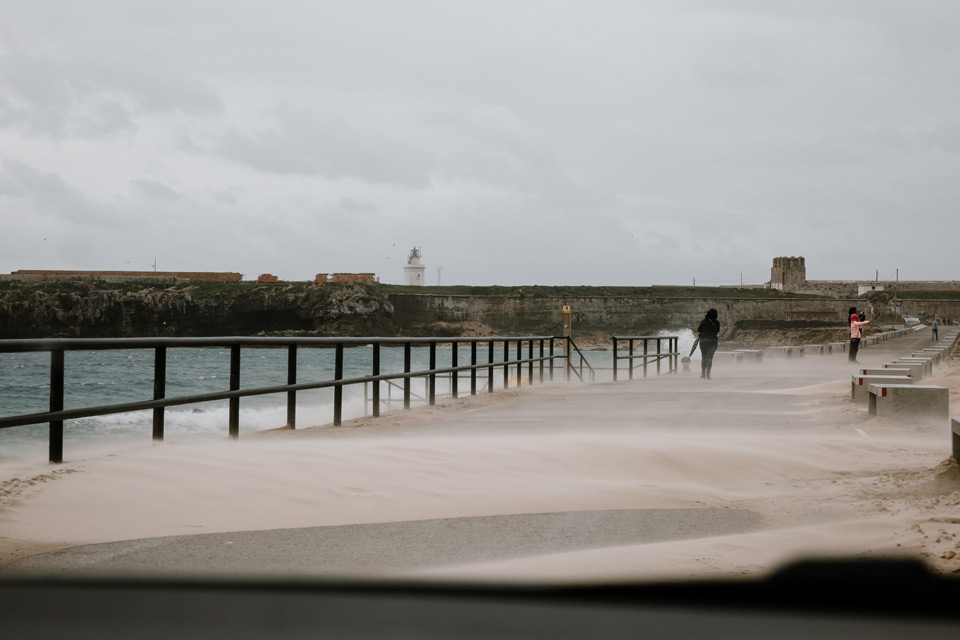 We go to another city in Andalusia – Cadiz. We pull the sand out of our ears, we shake it off our heads.

In Cadiz, we had a plan to photograph the sunset and take a walk along the promenade. Unfortunately, it rains a lot, so we move into the apartment and rest. We only leave for a moment with umbrellas for dinner. The search for restaurants takes some time, because almost all of them are closed. In the end, we accidentally find one and sit down. It was a good choice and the food the best we’ve had so far and all in all during our entire stay in Andalusia.

We ate salmon rolls with Spanish cheese, salmoreyo- the famous tomato cream soup served with egg and ham Jamon Serrano, seafood paella and something that may look a little uninteresting, but it was delicious- black pasta with white eels (called “angulas”) . We were given a sweet, Andalusian wine for drinking – also very good, unfortunately I don’t remember the name . It was the waitress that recommended it to us.

You will find more posts from Andalusia here:

Any cookies that may not be particularly necessary for the website to function and is used specifically to collect user personal data via analytics, ads, other embedded contents are termed as non-necessary cookies. It is mandatory to procure user consent prior to running these cookies on your website.